Current album - Tales From The Tenderloin

The Tenderloin is a district of San Francisco that covers about 50 blocks. Known for a very high crime rate and homelessness. The album is a love letter to the lifelong friends I made there in the 90's: the homeless, the broken and the forgotten.​​

The album was produced by Irish legend Dave De Bunker.

Three Singles have been released from the Album, "Fly Robin Fly", "The Battle" & "King George" all singles received fantastic reviews . ​​ 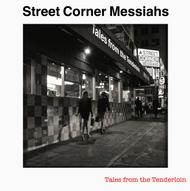 Tales from the Tenderloin can be purchased from the band during gigs.